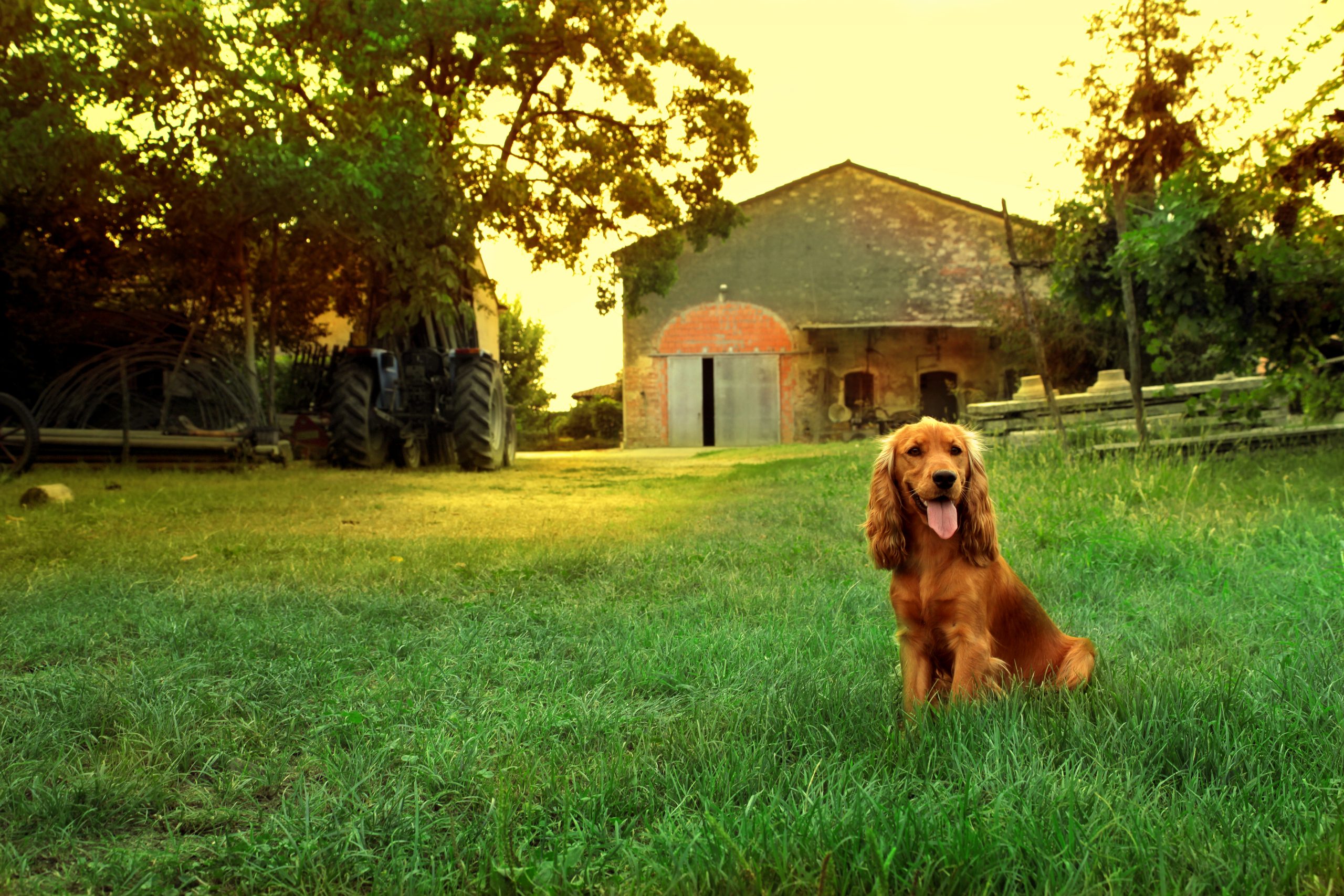 Why is My Dog or Cat Eating Grass?

Why do our pets like to eat grass? Some of the last animals we would expect to see eating grass are our beloved dogs and cats. Why do they behave this way, and what could be hiding behind this habit?

We have all seen how our dog or cat can “graze” quietly for minutes in a row, whether it is the grass in the garden, the grass in the park, or the grass you bought from the local pet shop. While some satisfy their “appetite” with a blade or two of grass, others eat incessantly, even being able to eat the grass with roots and everything, as some dogs do.

For example, my cat is crazy about sprouted wheat and doesn’t leave it until all the grass in the container is mowed down.

When it comes to opinions on the subject, they are divided, as usual – some people claim that their pets eat grass because they (maybe) suffer from a headache, while others say they do that because their stomach hurts or are bored. Let’s see what the research and evidence says about who’s right and who’s wrong!

Grass-eating behavior has been observed in the ancestors of dogs and cats for hundreds of years, namely the wolf and the wild African cat.

Although this behavior may seem strange to some pet owners, it is quite normal and common, according to studies. Surveys among dog owners have reported that 79% of their dogs consumed grass and other plants. The same study also showed that more than half of the studied dogs were eating plants daily or weekly – grass being the most frequently consumed plant (68%). Only a small percentage (9%) showed signs of illness before consuming the plants, while 22% vomited after consumption. There was no relationship between sex, breed, type of diet, or whether the animal was neutered or not. In addition to the above, this study also showed that young dogs were the ones who consumed plants most frequently, especially non-grass plants. The younger dogs also showed a significant decrease in vomiting after eating plants (1).

If you have a brand new puppy or kitten parent, you have seen your furry friend tasting different objects or foods that vary greatly in shape, size, and texture. Have you seen your pup with a mouth full of soil running wildly? Adorable!

Pups or kittens can try anything that catches their attention and makes them curious to explore, from leaves, soil, wood, to plastic bags, slippers, potted plants, apples, and so on. This behavior in young animals is called ‘mouthing’ (as in babies) and helps them learn about their surroundings, about different textures, tastes, etc.

Until a certain point, it is OK to let your pet explore, but do not let this become a permanent habit because it can have side effects that can become fatal – especially when it comes to pliable plastic objects.

According to studies, there are three possible reasons why our pets choose to eat grass or other plants:

1. They feel sick and need to vomit.

2. They have a dietary deficiency.

3. It serves a biologic purpose.

1. They feel sick and need to vomit.

Some people assume that dogs or cats consume grass when they are not feeling well, being a way to make them vomit and feel better afterward. But as I mentioned earlier, the evidence suggests that only a very small number of dogs consume grass because they feel sick.

It is said that the grass is consumed by dogs that are suffering from gastrointestinal problems such as stomach problems, nausea, bloating, constipation, and conditions caused by various pathogens such as intestinal worms.

One of the theories is that the grass is an irritant to the stomach, and ingesting it will cause gastric irritation, which in turn will make the dog or cat vomit. In other words, subclinical gastric or intestinal distress (with mild symptoms) may cause the animal to consume grass occasionally, which may facilitate vomiting.

Consumption of grass can also act as a laxative in case of constipation, helping the digestive system in the process of elimination. So don’t stress if your pets have diarrhea after eating grass!

Although all this seems like a logical explanation, some people dispute this idea based on the fact that it has not been proven that a dog is intelligent enough to “understand” that if it consumes grass, it will no longer have stomach problems.

As for cats, in addition to those mentioned in dogs, they also consume grass for its irritating properties, to facilitate the elimination of hairballs from the digestive system by vomiting. In their case also, studies have shown that cats do not appear to be sick before eating plants and do not vomit regularly afterward. Compared to dogs, they prefer to consume mostly non-grass plants (2).

2. They have a dietary deficiency.

Another theory is that our pets consume grass because they have a dietary deficiency. This deficiency arises from the need for dietary fiber that the organism has.

Like wolves, dogs are not 100% carnivores. According to researchers, the dog does not consume any type of grass he finds but instead he selects with purpose. It seems that the animal is looking for plants from which it can obtain additional nutrients that its diet lacks, such as fiber, minerals, or certain digestive enzymes.

As a veterinarian, I often recommend to my clients that in addition to the dry and/or wet food their dog consumes, they should also add once a week slices of carrots or apples depending on its weight. These vegetables will satisfy the body’s need for fiber, and as a result, the dog may no longer eat grass (so often at least).

Usually, commercial food brands add sufficient dietary fiber to their formulas, which will help your pet’s digestive system to function properly. But if your pet is still consuming grass or other plants whenever he has the occasion, another recommendation that comes from veterinarians is to change your pet’s diet with one that is richer in dietary fiber.

Here’s an anecdote to illustrate the point: a neutered Miniature Poodle (11 years old) was consuming grass whenever he went out for a walk for 7 years. This behavior was always followed by vomiting. After several medical examinations, the conclusion was that the dog had a plant-eating problem (probably to supplement its diet or relieve digestive problems). Three days after changing the diet, the dog did not eat grass and did not vomit after that, and even after 13 months, it showed no clinical signs (3).

As for cats, even if they are true carnivores (obligate carnivores), they also need dietary fiber in their diet. Like dogs, they cannot digest cellulose. Cellulose is a dietary fiber that occurs naturally in food sources. It is found in the cell walls of plants, with a role in protecting the plant from damage. In general, wild felines hunt herbivores, and besides eating the fur, hoofs, tendons, or bones, they also consume their stomach, which many times contain plant-based food scraps from their previous meal.  All of these act as fiber, which would pass through their digestive system as bulk and not be assimilated (and may or may not be fermented), helping the feline to function properly.

Whether you own a dog or a cat or both, adding dietary fiber to your pet’s diet has some benefits. If your pet has difficulty defecating, then adding fiber to its diet can set things in motion. Also, obese pets can benefit from a diet higher in fiber as it will make them feel fuller with fewer calories. In addition, in cats, adding fiber to their diet will help eliminate hairballs.

3. It serves as a biologic purpose

According to some studies, wild chimpanzees and other African apes choose to eat whole leaves (from a variety of plants) to get rid of intestinal worms (nematodes). These leaves pass through the intestinal tract, increasing the intestinal motility, and wrap around worms, facilitating their elimination (4, 5). This explanation may be possible regarding dogs and cats also, who may have inherited this behavior from their ancestors.

As I mentioned, young animals (puppies and kittens) most often consume grass or other plants. Researchers believe that this behavior may be due to the fact that they are more sensitive to intestinal parasites as opposed to adult animals (2).

Moreover, a study published in 2009 in the Journal of Veterinary Behavior showed that the behavior of eating grass in domestic dogs is innate and that the mother’s eating habits further facilitate the consumption of grass by puppies. As the dogs grew and were weaned, they spent more time eating grass, further supporting the idea that grass is seen as a food source (6).

In conclusion, dogs or cats that consume grass are not something out of the ordinary. It turns out that this behavior is relatively common.

In addition, the consumption of grass, as studies have shown, is not usually associated with gastrointestinal problems, but it may be a common trait inherited from their ancestors or mothers.

Just beware of toxic plants and chemically treated grass because they can represent a danger to your pet’s health!

Iuliana graduated from the University of Agronomical Sciences and Veterinary Medicine in 2012, Romania. She has a Master’s degree in Small Animal and Equines Pathology and a strong affinity for Veterinary Parasitology and Laboratory. In 2013 she started her Ph.D. in epithelial cancer in dogs and cats. She volunteered at the faculty’s clinic at her 3rd year of study, and continued her career in small animal p athology and laboratory. She has one cat and eleven rats. Her interests outside of work include traveling, writing, and crafting.